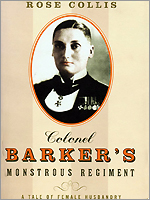 I first read my friend Rose Colliss book, Colonel Barkers Monstrous Regiment, when it was published by Virago in 2001.

Initially it didnt strike me as suitable for musical theatre but a subsequent evening with Rose, during the run of Achilles in Heels, gave me a complete different perspective on this true story of a woman who lived most of her life as a man from the 1920s onwards.

After three very successful workshop sessions at the Royal Academy of Music, the score is now completed and the show is actively looking for production.

One of the songs, Paris, was very successfully showcased at Iris Theatre’s Workin’ Progress evening in March 2011, beautifully sung by Shimi Goodman, and you can hear it on YouTube. Another song, The Fellowship of Mons was heard at the Snappy Title evening at the Pheasantry in February 2016, sung by Martin Neely and Jordan Langford